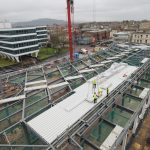 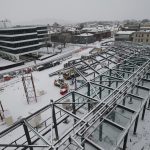 OUR video features as part of an extensive publicity campaign marking a significant milestone of Gloucester’s Kings Quarter regeneration project.

Produced on behalf of Kier and Gloucester City Council, the final edit debuted during Wednesday’s Point West programme on BBC One, shedding light on how the new state-of-the-art transport hub was constructed.

The video is also set to feature prominently throughout today’s opening ceremony at the bus station – marking competition of phase one of the city’s major regeneration works – ahead of it entering operation on Sunday 28 October 2018.

From November last year we worked closely with longstanding client Kier, providing continuous documentation – even during periods of severe snowfall – from the start of the £7.5m project through to its completion just under a year later.

Our industry-leading control capabilities enabled us to provide a fully managed service for the project, which captured key construction milestones, such as erection of steelwork and the installation of the iconic aerofoil roof.

This enabled our team of highly skilled editors to produce a final video fit for both live broadcast and use at events in the run-up to the bus station’s opening.

It is also the latest in a long line of infrastructure projects we have worked on. Others include:

We look forward to seeing the next stages of the Kings Quarter regeneration, as well as our continued work with Kier.