Our work across the UK and Europe: focus on East England 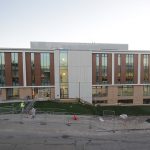 WITH successful projects now complete from King’s Lynn right down to Grays, we have become a key provider of commercial video services to the region.

Like our work in other major regions, these developments are of significant importance to their respective areas.

From retailer Tesco and global logistics provider XPO Logistics, to the University of Cambridge and multinational aeronautical specialists Airbus, we have helped to document major changes in cities towns such as Cambridge, Thurrock and Hemel Hempstead.

In the latter, as part of the “Hemel Evolution”, we focused on construction of a new state-of-the-art library – known as “The Forum”

This modern build – delivered by R G Carter in just over 12 months – now sits at the heart of the Gade Zone.

And our work with R G Carter in the region also extends to providing capture for another of their major builds, in King’s Lynn.

But our services are not limited to capturing just ‘traditional’ construction projects.

As one of the UK’s leading suppliers to the construction industry, Mick George work on a variety of unique projects in the region.

For the Huntingdon-based company, we have captured everything from a smaller-scale garden makeover at Addenbrooke’s Charitable Trust (ACT) through to the major demolition programme at RAF Brampton.

We have also worked on many internal projects, capturing fit-outs for the likes of Aryzta Bakeries, Airbus and XPO Logistics, amongst others.

Further south, for South Essex College we captured the demolition of former buildings and a car park, to make way for their new Thurrock campus.

We took the resulting 63,000 captured images and edited them into a professional video, which, although only lasting 60 seconds, showed this major redevelopment from start to finish.

Taking almost two years from site clearance through to completion, Project Capella is one of the largest education builds we have captured in the region.

The £79m, 18,000 sq m research facility is due to open later this year, when construction work – undertaken by top UK contractor Kier – is complete.

We are also capturing further construction work at the university, which will eventually form part of the new Chemistry of Health Centre.

These are just a selection of some of the varied projects we have previously captured in the East England region, with many more currently ongoing and starting in the near future.